Plant-based food diets have been on the minds of particular food consumers for some time, but now the reach of non-GMO or vegan consumables has branched out to the confection industry. Candy bars that are vegan, non-GMO and free from soy, gluten, artificial flavors and preservatives were notably present at the 2019 Sweets & Snacks Expo — the newest addition to a trend that affects manufacturers of these goods.

As these options make their way into new markets, AZO Inc. VITAL system sales engineers Bill Nesti and Mike Miller sat down to discuss the challenges related to conveying ingredients and materials for consumer’s non-GMO and vegan confectioneries:

Do you see vegan, non-GMO options as a growing industry trend in the confectionery industry? Are there any added challenges to conveying ingredients for that market?

MM: Those are some things that we've seen. You can classify those things as segregating processes. The classic confectioner is making something using milk chocolate, right? Well, vegans don't eat milk, so they're not going to eat a normal milk chocolate bar. If they want a vegan chocolate bar, and if that manufacturer wants to produce something for that market, then not only do they have to buy different materials, but they also have to certify that the equipment that they're using isn't containing all of those things in order to get that label. So now you need to guarantee that all the equipment you have for one system can be cleaned and can be basically desegregated to fit that bill.

That applies to someone who wants vegan [products] for instance or someone who wants GMO versus non-GMO. It's essentially the same thing. It's flavored differently, but at the core, you have to either have a completely separate process with different equipment, or you have to be able to clean that equipment in such a way that there is no risk to contamination. 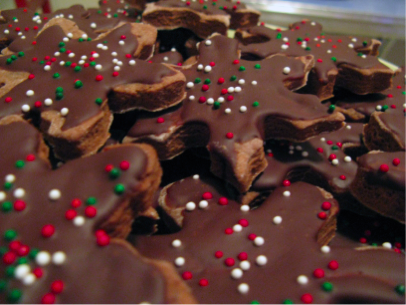 Vegan chocolate sugar cookies with chocolate ganache. Photo by Sara Jane via Wikimedia Commons. No changes were made.

So contamination is the main concern for conveying ingredients for these specific products?

MM: Contamination is the key word there. Same thing with allergen/non-allergen [ingredients]. The conversation about GMO/non-GMO has only been around for maybe five years. People have been segregating for allergens for 30 or 40 years or longer.

MM: Yes, the biggest one with allergen/non-allergen is tree nuts. Look at a Snickers bar for instance — it has peanuts in it. Well, the same factory might be making just a standard milk chocolate bar that doesn't have peanuts. They have to be able to segregate, and they either can clean the system completely and guarantee that those allergens aren’t present (which is typically unlikely in the case of allergens), or they have an allergen side of the house and a non-allergen side of the house. In that case, they draw a hard line between those two things.

BN: Another piece of food for thought is anytime you receive raw materials in bulk quantities, one of the key things to having a successful system is to keep it a closed system and conditioned with dry air to preserve it during the storage time and to keep it flowing consistently.

That would be a challenge. For example, sealing the materials in bulk and having them properly stored — the right condition to maintain and preserve quality and flowability.

Otherwise, there could even be a sanitation issue if the ingredients go bad, right?

BN: Absolutely, yes. And if it’s not a closed system, then there's room for contaminants to get in. When you start receiving materials in bulk quantities, you want to make sure that you can offload them in a closed manner and keep them in a maintained conditioned space to preserve quality and flowability.

That’s from a handling standpoint, but what about from a design standpoint?

BN: From a design standpoint, you want to receive in bulk but you don't want to just go crazy and put 10 days’ worth of storage out there for your sugar. If it sits that long, you're going to have a heck of a time trying to get it out. It tends to crust over. The key to handling some of those materials, which are hydroscopic, is to keep them stored in conditioned airspace and to keep them moving. I would suggest not storing any longer than a couple of days.

Back to separating your systems based on whether you're conveying something that's GMO/non-GMO or vegan/not vegan — it seems like it would be less expensive to have something that just cleans the system, but probably more sanitary to just have two entirely different systems. Right?

BN: You have to have separation. Let me cross a line here for a moment with you. In the world of liquids handling, in the food industry, in pharmaceuticals and also in dairy, they’ve been doing this practice for many years — using the same equipment and then CIPing it. We have a wash down methodology for it, and they're able to validate that.

But in dry solids handling, it’s very difficult to do that. It doesn’t imply a direct correlation. There's a problem with dry solids handling. In the few cases where people do wet CIP cleaning, it's very, very critical that they make sure that the system is completely dry before they put powders in it again. Otherwise, you make paste and bricks inside the equipment. In a hopper where you can have an inspection door, scrape it off or look at it, that’s one thing. But in our business, where you've got 200 feet of four-inch piping between the silo and your receiver above the mixer, there's no way to do that in those pipes.

You can’t look inside a 20-foot pipe, see the middle of it and inspect it to validate there was no water laying in there or there are no bacteria growing in there. The wet cleaning of dry bulk handling systems is done, but very sparingly on rare occasions. It's very difficult to really do it and be able to inspect it and sign off on it afterward.

Ultimately, are the concerns related to conveying vegan and non-GMO confectioneries new to AZO and AZO Inc., or are they similar to other concerns?

MM: We've been dealing with issues like that for a long time. Whether it's allergen/non-allergen, GMO/non-GMO, vegan/non-vegan, Halal/non-Halal. You know, all these things — they might seem vastly different, but at the equipment level, it's all the same stuff. It's containment risks and segregation risks.

BN: And the key is equipment that is easy to take apart and clean, which historically has played in AZO’s favor.

MM: Yes. Traditionally, if you look across the industry, the things that we espouse most are reliable equipment that doesn't break down. Relatively speaking, it’s more simply designed and easier to maintain or operate. If those are key attributes that are critical to your manufacturer, you're more likely to be an AZO customer.

If you are ready to become an AZO customer and convey materials using innovations that are easy to maintain and operate, our configurator is a great place to start. Contact our sales engineers if there are any options you don’t see listed. AZO Inc. has years of experience in tackling plant process challenges, from conveying materials with containment or segregation risks to many other unique concerns in automating ingredients.